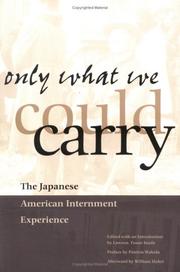 Only What We Could Carry The Japanese American Internment Experience by

Get this from a library! Only what we could carry: the Japanese American internment experience. [Lawson Fusao Inada; Patricia Wakida; William Minoru Hohri; California Historical Society.;] -- Personal documents, art, propaganda, and stories express the Japanese American experience in internment camps after the bombing of Pearl Harbor. SUMMARY OF THE BOOK: Through personal documents, art, and propaganda, Only What We Could Carry expresses through words, art, and haunting recollections, the fear, confusion and anger of the camp experience (from Heyday Books). Only What We Could Carry. This is an unusual book on the internment process, as it consists of information, but also includes poetry, artwork, photographs, and personal remembrances, making it a very fascinating work. The book starts right off noting that the U.S. suspended due process and put people of Japanese descent into what amounted to be. The day we left / Ben Iijima -- Editorials in the wake of Pearl Harbor -- Eyewitness to Pearl Harbor / Clay H. Musick -- Pearl Harbor remembered / Kay Uno -- The total community / Ron Dellums -- War comes to the church door / Eleanor Breed -- Can't tell / Nellie Wong -- from I know why the caged bird sings / Maya Angelou -- Photo essay: an.